MMO’s Seven bean soup kit is delicious and hardy. It includes pearled barley and short grained brown rice making it a complete protein. Add some fresh chopped kale or spinach during the last 10 minutes of cooking to really makes this soup awesome. Since barley contains the gluten protein, we have a no barley version for our gluten-free customers. (All of our other soups are Gluten Free already).  If you’d like to purchase a GF version that’s also either “Low Sodium” or “No Added Salt”, contact us.

MMO’s Seven Bean (and two grain*) Soup is a complete vegan kit that includes a large hand-made seasonings and vegetables packet which is choked full of delicious dried vegetables, herbs and spices. The kit also include organic short grained brown rice and organic pearled barley. The barley makes this soup have gluten, so a No Barley (gluten free) version is also available for folks with gluten intolerance. Easily prepare our Seven Bean Soup on the stove top or using a crock pot. Our Seven Bean Soup is also available in Low Sodium(110 mg), No Added Salt (15 mg) and No Barley (Gluten-free) versions at no additional cost.

Don’t short yourself on nutrition! Traditional cultures took great care to prepare their legumes (beans, peas, and lentils) with a long soak before cooking to enhance digestibility and nutrient absorption. We know today that biologically an extended soak brings the seeds out of quiescence (sleep) causing them to begin the transformation from seed to plant (sprouting). This is important for our nutrition since during this transformation tightly bound nutrients are released and converted to higher level nutrients. So soaking the seven bean mix for an extended time as suggested in our instructions significantly increases both the availability of the nutrients and the their quality. Additionally, an extended soaking removes nearly all of the phytic acid contained in the beans. Phytic acid is an anti-nutrient that blocks the uptake of nutrients by our bodies, so getting rid of it by rinsing after a prolonged soak is very desirable. Additionally, phytic acid is a serious irritant for our digestive tracts. Beans that are not extensively soaked and well rinsed before cooking can cause significant gastric disruption due to the phytic acid, insolubles, and gas-producing oligosaccharides. Avoid chlorinated water when soaking as this causes the seeds bran outer layer to petrify which may slow or prevent softening during cooking.

There are no reviews yet.

Be the first to review “Seven Bean Soup Kit” 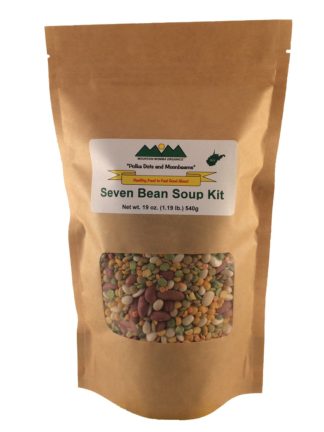